Took a well earned sanity break from prepping, basing and painting to take Lootenant Dominico Piezza USMC on a trip to Costaguano. 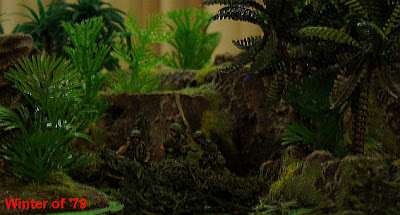 Pappa Bear, Pappa Bear, this is Broke Dick Dog.
We're in a world of hurt.....Over


A single seater spy plane piloted by a CIA agent has gone down. The 79th MEU currently based at Camp Leroy, Gibbs, Pennsylvania has been tasked with the mission. It's 4th July, everyone is at a BBQ or Atlanta, leaving Lt Piezza, Master Gunnery Sgt Bill Murray and their scratch squad of cooks, clerks and cleaners effect the rescue operation....

ps I'll get back to this but I have one last Argie 602 Company Commando left to finish - a converion to FN rifle and he's been a tough little bugger. Have to rebuild his left hand from Green Stuff , then paint etc - hope he'll be ready for tonights Top Malo game!
Posted by Mark at 02:00