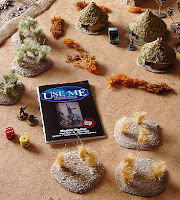 We're delighted the Bakonga template worked on Wednesday evening. It was one of those spur of the moment things - sun and lots of it - inspired two back to back games set in equally equatorial climes.

In an hour we managed two fun games with very clear results, whilst my Bakonga '79 scenario gave up a surprising story arc at the end.

The guy in the grey suit was the first figure I placed on the table (upper right in photo). Both he and the now wounded Bakongan warlord Desmond Lynami have inadvertently provided several more Wednesday night missions stemming from this one 'throw away' game. It's Call of Duty: Black Ops on the tabletop. Can't get better than that.

We've decided to hit the pause button on events in 1979 Britain for the next fortnight. The games have been terrific but have highlighted gaps in our respective collections. A short pause will give both of us, but me in particular, the breathing space to bring together my Winter of '79 scenery and tie up the loose ends of my figure and vehicle collection. For instance, Punks are high on the agenda. Several conversions are underway and should be finished early next week. Tartan bondage trousers et al.

I've sent Shaun at S&S Models a warning order for two more Fox CVR(W) which will get the Berlin Brigade urban camo treatment to join my similar Berlin Brigade Chieftains and Land Rovers. That will create a nice little Ten Field Force battlegroup.  Soooo tempted to do the same with Rolf's Saxon APCs.

More about Shaun later as a package has just this second arrived with 'hasty' barricades plus a couple of 'burning' cars I ordered on Wednesday. I'm trying to persuade Shaun to do a London Hackney Cab Taxi barricade, together with a burning Taxi as well. Would be great for Winter of '79, Zombies, post apocalypse, riots, alien invasion, you name it. Drop him a line if you think this is something you'd buy.

So what's happening gamewise? I'm hosting the Falklands next Wednesday, notably Top Malo House. The Argies being a mix of Platoon 20 and ex-Hotspur. Hopefully if Mark's new MJ Figures' Falklands 1982 Argies are here in time to paint, then I aim to game Mount Longdon on the 11th June. Speaking with Mark earlier in the week he expects his first Argies by the end of this coming week and more Falklands Paras coming from the sculptor over the next fortnight.

On the back of the Bakonga games, I've ordered some Platoon 20 'Modern' Americans in bush hats - aiming for a pastiche of Clint Eastwood's movie Heartbreak Ridge. Maff and I had a chat yesterday and decided a week of mayhem in British Equatorial Costaguano wouldn't go amiss. I have a bunch of ex-Hotspur Urgent Fury USMC in hand, Maff has Rangers and 82nd Airborne. Tony's card Falkland houses and shacks being perfect for the job. May even temporarily mount a couple of them on stilts.  USE ME: Modern Warfare again, this time with our own stats drawn up for the 1980's. Job done. 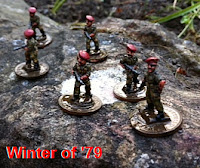 The second package to arrive this morning is an order made with Tony at East Riding Miniatures at 8.30 yesterday morning no less! Perhaps it's a mid-life thing but a lot of Platoon 20's Post WW2 and Modern figures really appeal to me right now. The figures to the right are Platoon 20 Dogs of War from Maff's collection. Caporal-Chef Pierre L'Escargot and his Commandos de Recherche et d'Action en Profondeur. Maybe it's doing Winter of '79. Maybe it's because I bought Platoon 20 figures first time round and want to recapture the games of my youth with them 30 plus years later. I know that part of it is that I can't argue with how easy Platoon 20 are to buy. Tony at East Riding Miniatures is a great bloke, always eager to help where possible.

I walked up to the Post Office first thing to pick up an eBay win that had come earlier in the week whilst I was at work. 23 genuine ex-Hotspur Falklands figures for £7. Most were an assorted bunch of Paras/Marines and Mountain & Artic Warfare Cadre who will be thrown into the Winter of '79 mix, plus a few Argie Marines in berets who are now destined for the Top Malo game next week. The Mountain & Artic Warfare Cadre as always are luvverly miniatures. I had intended to cut the weapons off these guys and give them SLRs instead plus a few spare CP Models bergans to become Winter of '79 rebels/Free Taff. But the figures are so well moulded and crisp in detail (definitely original Hotspur figures), that I'm loathe to do that now. The same figures from Stonewall just aren't worth the effort.

Time to enjoy the sunshine and prepare some newly arrived Platoon 20 Marine Recon and P20/ex-Hotspur Argie 602 Commando Company for painting over the weekend.