I Predict A Riot

Begun the Riot Squad today, whilst I make up my mind about the urban DPM on the Elhiem BAOR. These guys were a gift from MajorMike and they've been staring at me accusingly for some time. Now I have the time and above all mental energy to do them justice, I'm ready to tackle them - perspex helmet & riot shields et al - with a Humber Pig to back them up. 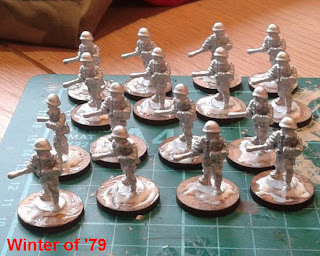 A package arrived this morning from Mark at Pumpkin Models. I've been dealing with Mark for the past year and he has been a great bloke. He's now running an eBay shop selling RH Models (Liberation Miniatures).  I ordered some figs on Sunday, after telling Maff that I didn't need any more, ahem. Well. I'm a sucker for combat radiomen figures. They were posted yesterday, here at 10am today.  That's service. At last Rolf's miniatures are visible, accessible and available from someone I trust. 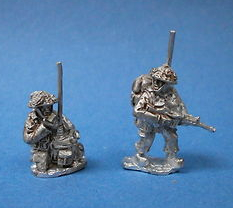 FALKRADFN, Ah those were the days.... trying to take down a message on a wet notepad, decoding/encoding with Slidex & Mapco whilst grappling with your rifle, with probably a tin of cold Chicken Supreme at the end of the day as reward... "And you try and tell the young people of today that ..... they won't believe you".

These FALKRADFN minis are luuverly. The helmets are brilliant - which can't unfortunately be said for the new 5 figure Falklands command set, FALKCOM H. Personally, for a five figure command pack, I'd have done a mix of berets, helmets, Sterlings and SLRs, especially given the eclectic release schedule. Three of the figures - all without backpacks - are very usable. May just get another pack to give them headswops to join the rebel forces.

I bought some extra stuff, but I'll reveal these later! Meanwhile, I've inserted a permanent link to Pumkin Models in the sidebar under 20mm Model & Figure Resources.

Anyway, these riot troops are almost ready now for the next stage....