A Big Man with a Bigger Moustache

Gareth "Butch" Squires was the complete opposite to head of the Free Wales Army, Garri Wyn; described as a "big man with a bigger moustache", he was a professional soldier and a natural fighting leader. Born in Bargoed, Butch joined the Welsh Guards, reaching the rank of Staff Sergeant; a keen rugby player (no 8) Butch was on secondment to SENTA as a skill at arms instructor when the Paras moved in on Warminster. A scratch force of pro Free Taff soldiers, with Butch at their head, seized SENTA and declared support for the Free Taffs. Officers from the other Welsh regular regiments and the Royal Marines arrived at SENTA to find local volunteers going through a gruelling training course run by a handful of Guardsmen - "we let them get on with it" said a Major in the Royal Welch Fusiliers, "no one wanted to argue with Squires".

Butch led the defence of Abergavenny once Wyn was pulled out and became a legend amongst the volunteers and TA men who formed the garrison. Living off crisps and cold tea, carrying a sterling and wearing his trademark black woolly hat, Butch led from the front, using a land rover to dash from point to point. A close knit "band of boyos" grew up about him who would later form the core of the Welsh Special Forces - those who survived, Stench, Dai Lewis and the more shadowy JJ and Snooze all learnt their trade in the streets of Abergavenny. 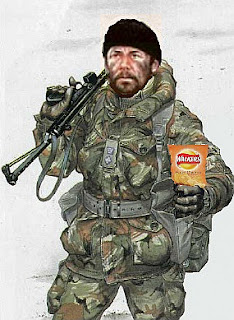 Post Abergavenny, Butch Squires remained a frontline commander who impressed his Sandhurst trained colleagues "the best man you could have on your flank " says Colonel ST of the Royal Marines. Butch's field career and his heroic reputation made him natural choice as Military Representative of the Free Welsh Delegation to the US Congress. Assisted by his flourishing romance with Ms Madison Gardens of CNN, Butch worked Washington like a scrum at the breakdown and was a key counterweight to the English military attaches; "Butch Squires not only talked the talk, he walked the walk but with parade ground precision" said now General Petraeus.

His marriage to star news reporter Madison Gardens made for a fairytale romance which was lapped up by the American media. "A story made for Hollywood" said lead star Daniel-Day Lewis in OK Magazine. Butch finally succumbed to cancer in 2005 and was accorded a state funeral by a grateful nation. He is survived by his seven children.