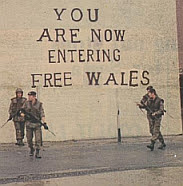 Quick game tonight with Wessex Rangers pushing up Lion Street, Abergavenny, against scratch but increasing resistance by a variety of Free Welsh troops and civilian militia.

A great opportunity to try HELL & UNCIVIL DISORDER by Jim Webster. OK, let's be honest. H&UD simply failed tonight. I'm sure it could work and be a great laugh with a group of gamers, beer, pies and a big table, but limited to my 2x3 urban setup, being gamed over Skype, not this time, not for us.

Don't let me put you off, HELL & UNCIVIL DISORDER is a fantastic alternative to AK47. Which is closer to where it lies in spirit. I find H&UD much more in tune with the character of 3rd world warlord conflict than AK47, but be warned that it's definitely not for the inner treadhead.

We had a bit of fun during the day playing with H&UDs  'Aggression' descriptors. Making them a bit more in character with Abergavenny in the Winter of '79. Here's what we came up with:

This saying seems very apt given the emerging prowess of "Butch", our Free Taff leader in 1979 Abergavenny. It's a neat period colloquialism to import into the game for characters/heroes to replace the 'Bottle', 'Guts', 'Elan' etc.labels given to combat/experience factors from our favourite rules, eg "Rough as 7 Bears", "8 Bears", "9 Bears".

Time to hit the party pack of Carling Black Label I think.