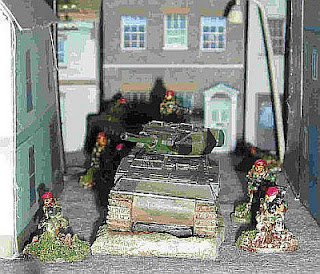 The assault on Abergavenny within our Winter of '79 alternative timeline represents a watershed in our wargaming. Throughout the week we have been gaming daily, using aerial photos, Google Earth street maps and our plain old imagination to conduct a game run along the lines of a military Tactical Exercise Without Troops (TEWT). And it's been a blast!

This was no IGOUGO game with strictly defined TOEs, shopping lists of resources available and turn limits. Instead, we established a framework that amounted to "this is the general situation, I have roughly these formations, you decide what you have", and then ran with it. In fact during the course of the game, we just pulled stuff out of the hat as it seemed appropriate or just fun to do so.

Enabled by modern technology the gaming was constant. By day and by night, we batted texts and emails back and forth - action, reaction, response. A natural ebb and flow of battle developed. If you weren't quick enough in planning a response, a spoiling attack or other situation might throw off your plans. Maff revelled in his command role, deploying a small but mobile defence to cause maximum havoc. 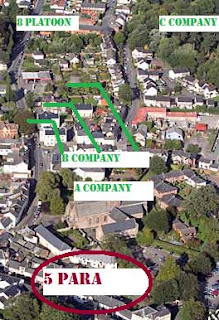 Each night we roughed up a situation map which was a springboard for the next day's actions. This is Tuesday night's situation map. The Wessex Rangers have relieved 5 Para. A Company have taken over St Mary's Priory. C Company is holding firm in the cemetery whilst their 8 Platoon conducts a fighting patrol which leaves them out on a limb. B Company is clearing a start line for a push up Lion Street (though Maff hasn't cottoned on to this just yet).

The introduction of Madison Gardens created a whole new dynamic to the game and established a story arc based around the centre of the town. From that point on it just seemed natural to blog up the story from the characters own view points rather than a dry blow by blow account.

Throughout the TEWT we kept our eyes open for gameable actions on the tabletop, without attempting to force a game simply for the sake of it. The opportunity finally came with Gaz and his lads being landed on the top of the Town Hall as a diversion for 5 Para Recce Platoon's assault up Cross Street. Well, you have to don't you.

I'd planned the Paras attack as a demonstration aimed at drawing in the Free Taff reserves. The Wessex Rangers supported by a rifle company of 5 Para would then spring a pincer movement up Lion Street. You can see in the photo below, the junction of  Lion and Cross streets at the Raglan Chambers makes a perfect salient within which to trap the core of the Welsh defenders. 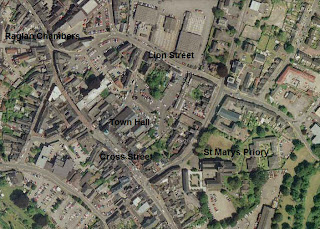 All in all, it was a far more challenging and much more fun than a normal 'accountancy' based wargame. The Apocalypse Now game was just - "quick! Get stuff on the table". It didn't have to look pretty, simply do-able. When you are really immersed in the story and action, exact model representation of this or that is redundant.

Next post will be the Abergavenny: Apocalypse Now: After Action Report (with photos). We may game the Wessex Rangers attack up Lion Street on Wednesday, see how we feel. And as things on the ground will be pretty fluid if not shaky at this point, it's a good excuse to bring in Hell and Uncivil Disorder by Jim Wallman. If Maff can hold the Wessex boys, he has a good chance of re-establishing his defence line, otherwise I think it's time for a fighting withdrawal to save innocent civilian casualties amongst the housing estates.