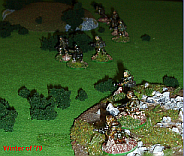 30 years ago on 31st May, 1982 Captain Rod Boswell led 18 men of the elite Royal Marine Mountain & Artic Warfare Cadre in what was to become an iconic action of the Falklands War. This wargame is a small tribute to the combatants on both sides.

It began when an M&AWC OP on the lower slopes of Mount Simon reported two Bell UH-1 helicopters dropping off an Argentine patrol at Top Malo House. These were Captain Jose Arnobio Vercesi, commander of the 1st Assault Section, 602 Commando Company, 8 men of the1st Section and two Blowpipe shoulder launched AA Missile gunners. At this stage of the campaign, the Argentines were using their Special Forces to set up anti-aircraft/helicopter ambushes along probable air corridors and this was their most likely intent.

Captain Boswell planned to neutralise the threat posed by the Argentines, inserting by helicopter in dead ground 1,000 yards away and attacking their position in the house. Boswell's force was divided historically into an Assault Section and a Support Group. Each with two fireteams.  The figures were deployed accordingly and the stage set for the tabletop action. 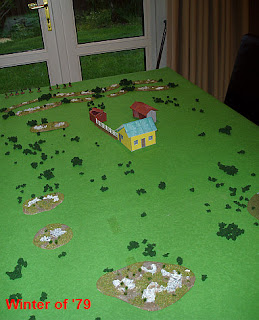 Maff's planned mirrored Boswells. Hammer the Argies with sustained violence from LAWs and GPMGs of the Support Group whilst the Assault Section got up close and personal with size 10's.

The violence began on queue. As a green flare arched into the sky, the Support Group unleashed a volley of LAWs at Top Malo House. Only one LAW hit, nevertheless shaking the men inside and starting a raging fire. 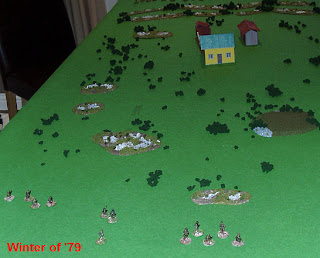 The assault begins:
LtoR One Bravo, Boswell, One Alpha
Support Group off camera to the right

Under cover of the GPMGs the Assault Section pepper-potted forward in bounds. A group of Argies burst from the house doubling for the stream bed, covered by the sniper in the upstairs room. He aimed and fired, crumpling an unlucky Marine from team One Bravo on the left. 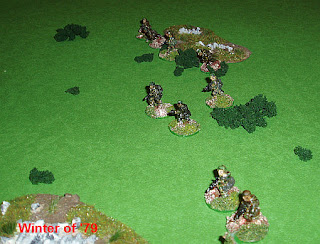 Another volley of LAWs then the massed GPMGs and Cadre sniper retaliated in kind. Massing their guns and ending the Argentine sniper threat in a formidable firepower demonstration. 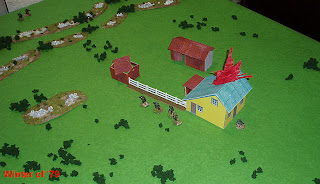 Argie Commandos dash for the protection of the gulley


By this time the Argies had reached the stream bed and from cover returned a withering fire on the remaining Marines in One Bravo, taking out a second Marine and enabling another group of Argies to leg it from the collapsing building. One them tumbles from Cadre fire. 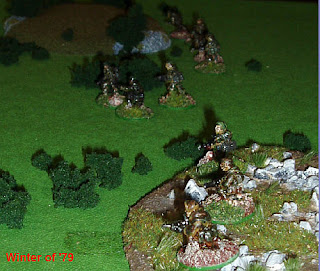 Whilst his companion went to the aid of their stricken mukkas, the light machine gunner in One Bravo laid down a solo barrage on the Argies who manned the stream bed, killing their sergeant. 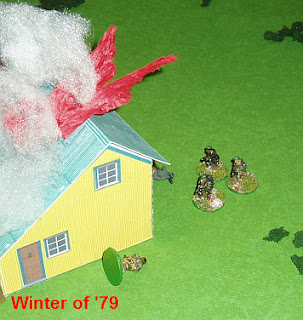 Meanwhile Boswell had reached the burning building. Two remaining Argies here fell into the hands of One Alpha, unceremoniously being passed onto some of the Support Group lads who had come forward. Boswell's sergeant fired his M79 at the Argie Commandos in the donga, scoring a hit that killed one Commando and wounded Captain Vercesi with splinters.

One Alpha made the most of the cover afforded by the few out houses and the smoke from the burning building to work round the Argies left. 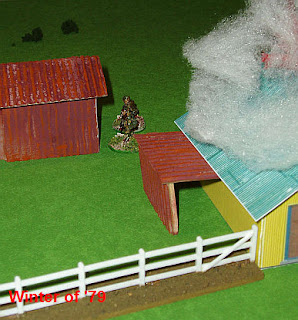 One Alpha use the available cover to outflank the Argies

The Support Group had re-established itself in a new firing position that now covered the whole Argie position in the stream. Both sides traded rounds. Some good die rolls by the Marines had degraded the Argie Commandos fire, but failed to score any more hits.

One Alpha broke cover, keeping the Argies pinned with classic fire and movement, they made it to the safety of the stream bed and then began moving upstream with malicious intent. This action sealed the fate of the Argie Commandos. With two men down, a wounded boss, outgunned and outflanked, they surrendered. 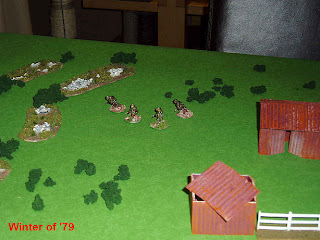 One Alpha fire & manoeuvre to the gully

A surprisingly tactically challenging game. The Cadre have a lot of firepower but a lot of open ground to cover. As the Argentine commander do you remain in the house and surrounds to slug it out against superior fire or try to withdraw to the gully, to fight it out from their or escape?

In all, 40 action packed minutes to play. It was great to be able to use two packs of my ex-Hotspur M&AWC figures for the role they were originally sculpted. That added to my enjoyment. You'll notice a few ex-Hotspur SAS, Marines and others in cold weather caps included in the force to ring the changes.

Really enjoyed the game, even as the Argie player and definitely a game to play again, especially as a '79 Welsh scenario.

A couple of ideas came out during play and a few realisations - like I really need to finish those outbuildings and fences, make proper fire and smoke markers and ditch this camera. Plus, make up a two more Top Malo House kits showing various stages of destruction! As the building is also a one-off a bit of time spent creating a decoupage effect would be worthwhile. Tony's kit is very nice as it is though for a one-off game thrown down at home or down the club.

M&AWC: 2 casualties
602 Commando: 5 casualties including Vercesi, 2 captured, 4 gave themselves up.