Despite being a really chilled time in the sun and not one but two BBQs, the Winter of '79 headshed had really productive weekends.

Maff concentrated on his American 'Imperialist Running Dogs' (the 'green' ones below), a mix of ex-Hotspur Urgent Fury US Airborne, Marines and SEALs. Whilst I managed a heap of Warlord Militia from Mutineer Miniatures, the Platoon 20 US (Marine Recon) in boonie hats and enough Argie 602 Commandos to give Sarah Beeney a meaty restoration job at Top Malo House on Wednesday night. 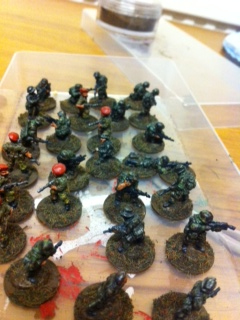 Later yesterday evening, well more early hours of this morning, I even finished a brick of W'79 SO19 Anti-Terrorist police that had been hanging around for a while. Finally, before hitting my bivvy, I based a bunch of Liberation Miniatures 'Contras' - because they were there and I have the bug to just get stuff done.

On the way home on Friday, I picked up some compartmentalised 'Toolbox Organisers' from Poundland - for a £1, surprisingly - and have used these to organise my remaining Winter of 79 conversion and painting piles. Result, this morning I picked out a section with of Elhiem BAOR figures, cleaned, based and primed them alongside some OOP Citadel Dark Future Punks.

The Elhiem figures are a real joy to handle and look really warry once primed and based. The Charlie G No.1 has been left to one side because I'm tempted to turn him in a 'sparks' with manpack radio. He would also make an easy if little fussy conversion into a leader by giving him a raised right arm.

Now they've been sprayed with a grey primer (to aid my eyesight), I really do have this an urge to paint them up in Urban DPM to make them truly distinct as Govt forces. 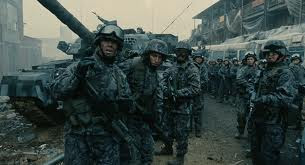 Tempting, tempting, however, I've slowly amassed a number of Gulf War era British from SHQ & Wee Friends  via eBay that would be perfect as select Govt troops with latest weapons and kit - MKVI helmet, XL85E1 and XL86E1, if I was to do Urban DPM (Children of Men). Something tells me that is a bit too ITV mini-series, but it remains a fun option.

Don't worry, SLRs and Sterlings all round for now but if I sell the rights to ITV for Winter of '79, then that's another thing altogether. LOL!