With the Welsh front having reached a natural pause and at least one of the heroes given his recognition, it seemed like a good moment to head off for a bit of sun. So, this evening found both of us on Skype and due to an uncharacteristic miscommunication both with a game set up for the other and both games set in.......BAKONGA.

Dateline Bakongaville, 1979. Civil war looms as the army loyal to the Liberal Party government folds in the face of a Peoples Popular Party onslaught. Father Ted O'Crilly, five nuns of the Sisters of Perpetual Indulgence and fifty Bakongalese orphans are trapped at the airport. Only four mercenaries - Para Pete, Ruid, Pierre and Billy stand in the way of the Simba mob! Whistling "Spanish Harlem" the heroic four prepare to save the lives of the poor wee orphans and Father Ted. And the nuns, they're people too. 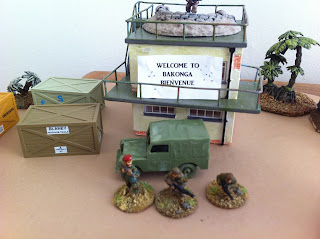 Bakonga Intl Airport and defenders. That crate is labelled "BLANEY MACHINE TOOLS". Honest. The Simbas closed in from all sides as Crilly floored the ageing bus up the runway towards the waiting Dakota......sorry, that picture didn't come out. 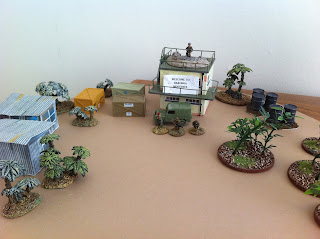 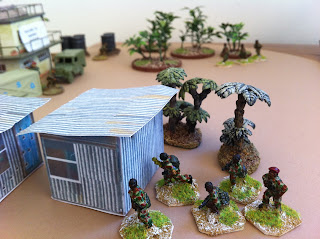 Simbas can be seen closing in

Frankly, all hell broke loose with Ruid using the MAG MG on the roof to stop three waves of Rebels, Pete and Billy held of the mob infiltrating via the shanties, while Pierre had a personal duel with another bunch sniping at him from the bush. Rounds were flying all over as the Mercs bought time for Father Ted to reach the plane.  As he did so, disaster struck, the simbas in the shanties activated a leader who got most of them firing at once; in the hail of bullets Pete was injured and Billy was killed. But....the last orphan was aboard and the mercs were free to leave in a hurry. Well, by free, they got to the Land Rover OK but had to drive the gauntlet of heavy simba fire as they tore off after the Dakota. ﻿