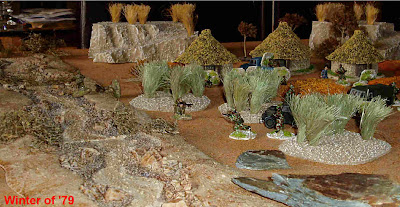 There's a reason why Gaz never speaks about BAKONGA. Tonight the story started to unfold as Blue Team are tasked with eliminating Bakongan warlord Desmond Lynami. A 14 Company operation in Liverpool had uncovered a shipment of ex-Libyan, Bakongan AK47s and the trail led back to one man.

......It was going too smooth, even for Gaz. The infiltration was right on the button. They were lying waiting and the target nonchalantly appears surrounded by bodyguards. But who was the illusive man in the grey suit? Ginge thought they should get confirmation. For Gaz the mission was Lynami. They'd take out Lynami and then pick up the 'suit' when they cleared through the kraal.

Lynami's guards never knew what hit them. Lynami went down in the second volley of shots and started to crawl towards his Land Rover. The 'suit' stood for a turn in panic then ran. Gaz shouted 'Let's go!' and he Ginge and Stiffy skirmished forward..... "Too easy, too easy" was repeating in his head.

Two Lannies appeared in a cloud of dust and roared towards the kraal. Dave with the Bren (L4) gave the lead Lannie a full mag. A cumpled body fell out as it slew to a halt only yards away, disgorging men. 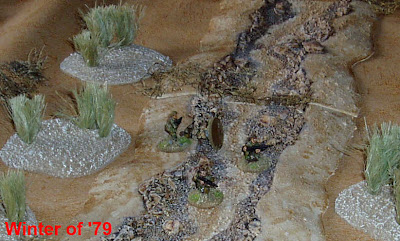 Doing it in the Donga!

"Sod this for a game of soldiers" flashed through Gaz's mind. Uncharacteristic caution urged him to get outta dodge' NOW! Reluctantly he gave up the chance to catch the 'suit' and began the job of falling back, by two's. Fire, manoeuvre. Fire manoeuvre. Too late! Stiffy was hit and killed outright by a burst from a Bakongan RPK. Nevertheless Gaz dragged Stiffy's body by his harness back across the donga under fire, covered by Ginge and Dave.

Dave proved to be the man of the match. Ignoring rounds skipping off the veldt, he Covered the withdrawal with his 'Bren', L4 LMG, killing every Bakongan who exposed himself from the long grass to cross the donga. Losing three more men, the remainder of the Bakongans decided it wasn't worth the effort and slunk back to the village to find and give aid to the wounded Lynami, hiding in the back of his Land Rover. 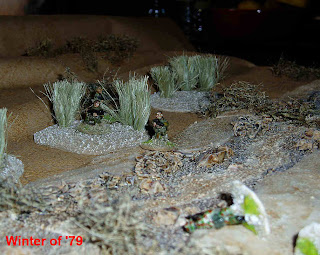