4 Wheels on my Armoured Wagon

Fully in tune with my Winter of '79 concept, Heather generously gave me these 1/76th scale B.W. Models kits for Christmas:

I was in love with these models, that is until I open the packets and looked at them carefully. I'll review the individual models in more detail during the course of this week.

Still swaying about getting your hands on some Internal Security models? Take a look at ModelShopBelfast.co.uk where they are displayed in an appropriate I.S. setting. Right up your 'street' Joe! Here's an example: 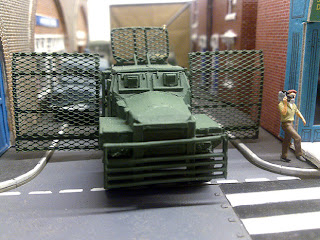 BW Models, BW297: Humber 'Flying Pig' £15.00
photo from ModelShopBelfast.co.uk
In addition to Heather's present, I also received a fistful Eureka's 20mm Internal Security Brits in riot gear from Mike. A small bag of separate 20mm SLR rifles were included, allowing me to push on with converting civilian figures into armed militia or rebels. Thank you, Mike!