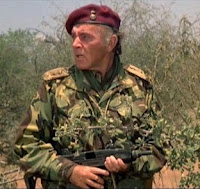 The sub-machine gun of choice for your ex-pat Mercenaries, criminal underworld and common or garden revolutionary in 1979 was the Uzi. Designed by Israeli general Uziel Gal in 1948, it's reliability and reputation in action saw it become the favoured weapon of the world's elite forces and terrorists alike.

The Uzi was considered accurate for a gas blow back operated sub-machine gun, plus good penetration and stopping power. Additional plus points were  low recoil, muzzle blast, climb, size, weight, cost, and minimal training time. All in all, making it an ideal for civilians turned freedom fighters.

I must admit, I prefer the idea of British renegades and rebels armed with Uzi's (and Sterlings) in '79 rather than more hackneyed  AK47 and Armalite. East Riding Miniatures (Platoon 20)  have a variety of Uzi armed figures mixed into their post war Civilian/Freedom Fighter and IDF ranges. Rolf Hedges has a pack of Uzi armed civilians (code UrbUzi) in his Urban Terror range.

I recently bought a pack of Elheim Pakistani troops with H&K MP5 (code PAK05), My plan is to convert them to more civilian attire and use the h&K MP5 as a Uzi proxy. May just give them a headswop and use the figures as para-military or rebel militia types.