The Special Air Service (SAS) gained fame in the Western Desert during WW2,  in using heavily armed US Willys Jeeps to conduct hit and run missions on German airfields and lines of communication.

The SAS regained a desert role in the mid 1950's in Oman where they operated a small fleet of armed Series I 88" Land Rovers. These heavily armed Land Rovers were festooned with weapons. The commander sat to the left of the driver, on a raised seat, and was armed with twin forward firing Vickers K machine guns mounted above the dashboard. The radio operator sat centrally in the rear compartment, facing backwards with his radio sets to his left and a .30 calibre heavy machine gun. Even the driver had a machine gun, mounted on his door pillar.

With the need to increase the scope of operations to cover Aden and other middle-eastern hotspots, the SAS Mobility Troop switched to the Series IIA 109 Land Rover in 1967. It immediately gained the nickname of 'Pink Panther' or 'Pinkie' after it's pink, yes pink, desert camouflage. Worth noting that Until 1974 at least, military Land Rovers left the Solihull factory in deep bronze green and were painted for role or theatre as necessary. Olive Drab/Black camouflaged Pink Panthers saw service in Borneo, Belize and operating in forward reconnaissance roles on the inner German border during the Cold War. 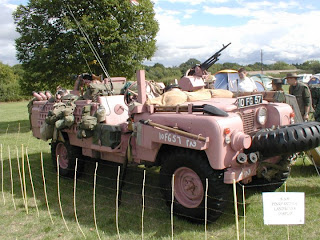 These 109-inch Series IIs were stripped of doors and windscreens and fitted with multiple smoke grenade launchers, a new spare wheel mount, desert compass, long-range fuel tanks and water tanks and of course a battery of weapons.

It's possible that in 1979, they migt also have had

The Series IIA Pinkies remained in service until 1985 when they were replaced with the new Land Rover 110 DPV (Desert Patrol Vehicle).

I don't think there are currently any Pink Panthers available in 1/76th or 20mm. Rolf Hedges does plan to make one:  BAFV21; SAS PINK PANTHER LAND ROVER (1960'S/70'S ) but still NYA (Not Yet Available). Rolf has a usable proxy in the form of BAFV10; SAS DPV LANDROVER AS USED IN 1991. He also sells a range of vehicle heavy weaons such as pintle GPMGs for those wanting to convert standard military or civillian Land Rovers or other vehicles.