State of Emergency by Dominc Sandbrook

.
If your wife or partner is looking for a discrete last minute gift for you, I recommend STATE OF EMERGENCY The Way We Were: Britain 1970-74 by Dominic Sandbrook. Now available from Amazon at a reduced price. 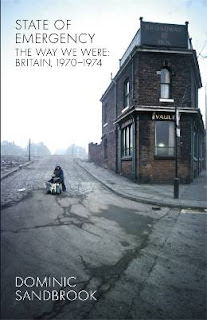 Whilst aimed at the opposite end of the decade we are recreating in miniature, this book sets the scene of what Britain was about in the 1970's. We see a country in crisis and how easily it could have tipped into a Winter of '79 abyss back in 1974. For instance, by November 1973 the Tory government had declared no less than 5 states of emergency in just 3 years of office.To put the intensity of the crisis into context, emergency powers were only invoked 12 times during the whole period between 1920 and 1982.

For a forty something, child of the seventies like myself,  State of Emergency illuminates a world which I may have experienced but my parents endured - 3 days weeks, power cuts, shortages. Great background reading. I've dipped into a copy at Waterstone's several times whilst waiting for a later commuter train home and have consequently added it to my own Christmas wishlist.