Four Tonnes on My Wagon

"Any kind of creature comforts are noticeable by their absence, and there is nothing more dreadful an experience than waking up (usually freezing) from a deep, motion-unduced sleep and realising you're in the back of one of these fuckers, you've got a Kit-Kat Arse - and you're heading for Wales.

That wonderfully evocative prose made me laugh and is taken from a 'wiki' entry on British Army 'four-tonners' found in the ARSE (ARmy Rumour SErvice) forum. 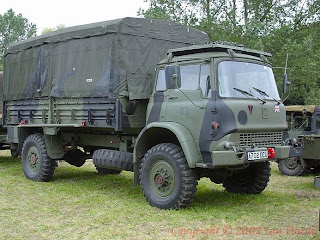 Bedford MK 4x4 GS Truck
The classic 'four-tonner' of our period is the venerable Bedford MK "boneshaker". It came in a wide variety of configurations and roles - Command, Signals, Workshops, Fuel & Water tankers as well as being a poor man's APC. The most common model in service was the G.S (General Service) 4x4 cargo truck. 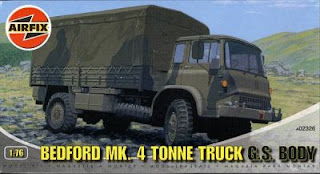 Airfix (ex-JB Models) 1/76th Bedford MK
The MK was supplemented by the practically identical TK 4x2 model plus the older Bedford RL 4x4 from the 1960's which had the identifiable older rounded cab. 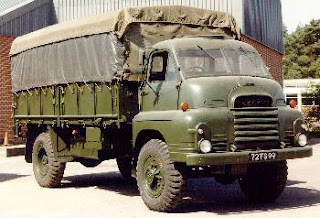 Bedford RL 4x4 GS Truck
Possibly the sexiest and certainly most Sci Fi looking wheeled vehicle in the seventies was the FV622 Stalwart Mk2. Designed to have the cross country performance of a Saladin armored car, carry 38 soldiers, 5 tonnes of cargo and not let a small thing such as a lack of a bridge over a river get in the way! 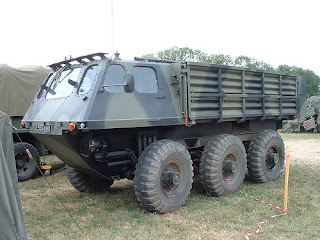 Alvis Stalwart Mk2 6x6 High Mobility Load Carrier
The Stalwart was mainly used as an ammunition carrier by Field Artillery Regiments in BAOR Germany and as a repair vehicle by REME.

As I mentioned in a previous post, what we see on paper is very different from the actuality. Whilst Terry Gander's Encyclopedia of the British Army (1980 ed) might present mostly up to date and modern kit and show TOEs stuffed to the gunnels with the latest weaponry the reality is somewhat different. The British Army held a wonderfully varied selection of wheeled vehicles on it's establishment or hidden away mothballed in stores.

Even with army vehicles numbering in the tens of thousands it was expected in wartime, that civilian haulage contractors would be used to move troops, weapons and supplies to the ports, if not actually to rear bases in Holland and Belgium. It was a joke in my unit that we would be going to war in Woolworths delivery vans. But somehow I expect, a joke not very far from the truth! LOL!

In any civil war situation it is likely that civilian transport will be begged, borrowed or simply coerced into the inventory of either side as required. Opening a rich and colourful seam for us to play around with. Matt was even wondering (semi-seriously) about an ice cream van as his 'Free Taff' Army command vehicle.

Barry Wright at B. W. Models produces the most comprehensive range of 1/76 scale / OO scale white metal model vehicle kits of military vehicles used by all branches of the British Armed Forces from 1940 onwards. These are complemented by a wide range of  accessory sets and decal transfer sheets. 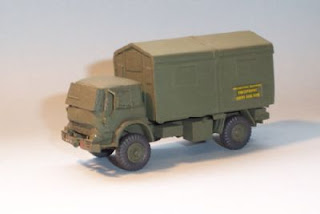 BW Models BW302 1/76th
Beford MK with VPK & Tilt Roof
Barry also does Internal Security (IS) variants of British army vehicles such as the 'four tonner' with tilt lid above- just up our street!