.
Just about anywhere the British Army ventured, around the world, you could find a Land Rover earning its crust. From the mid-seventies to the late nineties, this was the Series III 109 'Long WheelBase'. 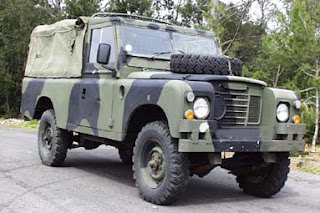 Procurement of the long wheelbase Series III began in the 1972/3 fiscal year, and from 1974 until 1981 large numbers eneterd service every year to replace previous models of Land Rover II and IIA that had reached the end of their economical life. The short wheelbase (88 as opposed to 109 inch) Series III was also procured in small numbers, though these were far outnumbered by purpose-designed 88 inch Lightweight military model which served with formations like the Paras and the Royal Marines (though they still had a number of 109's in command & support roles, such as providing a self propeeled platform for a 120mm WOMBAT L6 recoilless rifle.

By far the majority of the British military Series III 109 fleet came fitted with either a soft top or a plain hardtop with no side windows behind the cab. All three services (Navy, Army and Air Force) made widespread use of the standard hard and soft top long wheelbase for a wide variety of duties. Small quantities of truck cab and windowed hard tops were also produced, along with a four-stretcher ambulance variant and partially militarised 109 Station Wagon. These were often treated with derision by squaddies on foot and called Daktaris, after the TV show. 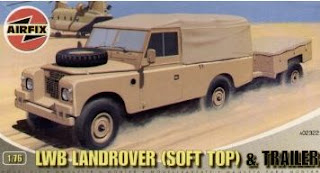 The truck cab 109s were favoured by the Royal Navy and the Royal Marines, particularly the Commando Training Centre at Lympstone in Devon, but other training establishments also used them. The windowed hardtops were an RAF favourite, as they allowed good all-round visibility on airfields. 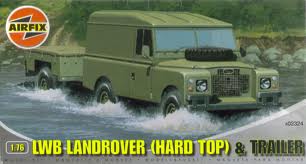 The Series III military 109 was essentially similar to any other off-the-forecourt long wheelbase Land Rover of the period.  Unlike civilian vehicles, the middle seat was fitted to allow a radio set to be mounted on the rear bulkhead and bench seats fitted for eight soldiers. They also generally carried a pickaxe, broken down into its two component parts, and a shovelon the rear door or tailgate.

You'll often see the designation FFR (Fitted For Radio). Externally, FFR Land Rovers could be recognised by antennae mounts either side behind the front doors, and mounting boxes for two more antennae on the wings. The real difference though is in a 24v electrics system under the bonnet to run the radio equipment. 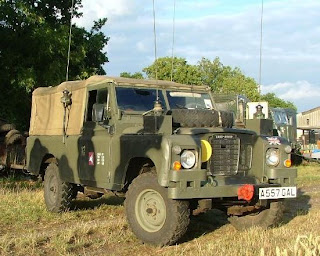 Hardtops were preferred for radio and command use, offering greater protection from the elements to crew and tempramental radio kit, but many front-line and reconnaissance formations were issued FFR soft tops as these were easier to strip down for helicopter transportation and had a lower silhouette for reconnaissance work.

The FFR Land Rovers belonging to Recce Troop of X Para (V) were usually crewed by three to five and armed with a single GPMG. Operating in pairs, they were low profile, fast and agile across most terrain. Their mission was to watch for enemy movement and pass the information back to the main force, hopefully without being compromised. These scrim-clad Land Rovers were known as Dougals for their resemblence to the character of the same name on the Magic Roundabout.

Post War, the Land Rover was the most ubiquitous workhorse of the British military transport fleet. Undertaking the roles previously carried out by both the Jeep and 15 Cwt truck.