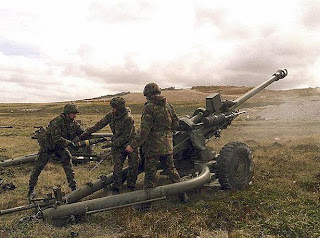 Our examination of British Towed Field Artillery in 1979 begins with the venerable QF 25pdr of WW2 fame. Following the Korean War, the Royal Artillery resumed a campaign to obtain a field gun with a range of at least 15,000 yards. The 25pdr Mk2 whilst having an excellent shell that was reputed to be 1.5 times more effective than the American M1 105mm ammunition, was lumbered with a range of 13,500 yards.

As the American Army and many American equipped NATO armed forces possessed 105mm field artillery, designing a new weapon around the 25pdr shell would most likely create supply and interoperability issues in any future major conflict. It was also argued that a 6 gun 105mm battery would put the same weight of firepower down as an 8 gun 25pdr battery. The new field artillery gun would therefore be 105mm.

After a two year trial, the British Army adopted the Italian-made 105/14 Model 56 105-mm pack howitzer firing the American 105-mm M1 shell which was common to the M101 and M102 field guns. The 25pdr was gradually phased out until finally withdrawn from front-line use in 1967. Requipping all batteries home and abroad except those in BAOR. On paper the OTERO was a bean counters dream. No expensive develpment costs, batteries of 8 guns could be reduced to 6 with no loss in firepower, there was ample stocks of readily available ammunition, it could double as an anti-tank gun and be towed by a long wheelbase Land Rover, doing away with specialist movers. Plus it could even be broken down into mule loads for colonial dicking about (there were still mule batteries until 1975). Done!

By 1979, the 25pdr soldiered on in batteries of 2 TAVR artillery regiments, 5 Officer Training Units (OTUs) and most famously, with the Honorable Artillery Company for ceremonial salutes and similar pomp and circumstance. The odd 25pdr could be found up and down the country in museums, outside town halls, used for ceremonial duties or as 'Clock' guns like at Edinburgh Castle. It's last use in a field role was 1992.

But the Italian replacement for the 25pdr only had a short service history. With a range of just 10,936 yards, the performance of the 105mm Pack Howitzer L5 (British designation), fell far short of Royal Artillery requirements, and the stub axles proved so weak that it could not withstand long-distance towing at high speed, so had to be carried on the back of a portee.

Development of a new British 105-mm gun commenced in 1966. This new Light Gun was designed from the outset to meet the needs of the gunners and overcome the shortages made evident by the 105mm Pack Howitzer.

The 105mm Light Gun L118 had a range of 17,200 metres (20 000 with 'base bleed' round), and performed faultlessly in the Falklands.It fired the same the L31 high Explosve shell as the Abbot 105mm self Propelled Gun. Both could fire the American 105mm M1 shell with British charges to a reduced range of 15,000 metres. In extremis, the L118 could double as an anti-tank gun using a HESH anti-tank round with a maximum range of 800 metres. A throw-back to the 25pdr was the ability for one man to execute a rapid traverse using a trailspike. 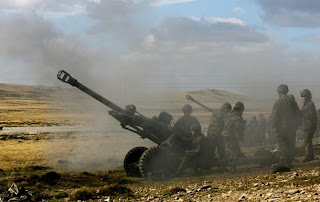 First deliveries began in 1974 and it was around 1979/80 when the final changeover from the 105mm Pack Howitzer L5 took place. The Pack Howitzers continued in use in training units such as the Junior Leaders Regiment, Royal Artillery but many were placed into storage as there was still a large stockpile of 105mm American M1 shells.

The Light Gun L118, was highly portable and could be slung underneath a Puma or Sea King, or split into two loads to be carried by Westland Wessex helicopters. It had a specialised towing vehicle in the shape of the The 1-tonne Land Rover. Each gun had two 1-tonne Land Rovers - one for the crew together with a small ready stock of ammunition and a second with 28 more rounds. It also entered service with the US and Australian Armies as the L119.

The Light Gun proved invaluable in overcoming ground mobility challenges of the Falklands campaign. With virtually no ground transportation to move the guns and ammunition from one position to another, the limited number of helicopters available lifted the four batteries supporting 3 Commando Brigade from the ships to the high ground ashore to support the landing at San Carlos. Then at Goose Green, helicopters initially lifted 3 guns, ammunition, and personnel from 8 Commando Battery to support 2 Para’s attack before bringing brought forward the remaining elements of the battery. At the zenith of the campaign, five batteries with a large volume of ammunition, numbering in the tens of thousands of shells were lifted eastward from San Carlos to the Mount Kent area and beyond to support the attack on Port Stanley.

Another WW2 veteran soldiered on into the late seventies. The 5.5 inch howitzer. In 1979 it served with 2 Terroritorial Army artillery regiments in the UK and like the 25pdr could be found in training depots and museums. 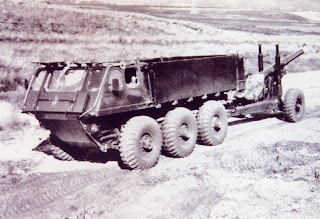 The final field piece under consideration is the 155mm L121 (FH70). The FH70 entered service in 1978. It had a high rate of fire, could fire a shell 20.7km and if it came down to it in battle, could be operated by the solitary surviving crewman. It also had an auxiliary petrol engine that allowed it to maneouvre short distances without the need for a prime mover! However, it was found that the tube feed system consistently failed in anything other than perfect conditions and the trail had a weakness that caused it to fail. It was meant to replace the 5.5" howitzer and this was only just started in 1978.


SUMMARY
So, for our 1979 civil war gaming scenario we have a wide range of WW2 and modern towed field artillery available, which adds both flexibility and charcater to our games.You may even want to include ex-WW1 artillery pieces such as the 13pdrs of the King's Troop, Royal Horse Artillery.

BW Models 5.5" (BW25)
The 105mm Pack Howitzer is again available from Skytrex (code FF681) - a good weapon to equip Royal Marine Commando units or rebel forces. With large stocks of the American M1 105mm round in country and available on the international market, it would certainly be a useful weapon in the rebel armoury. 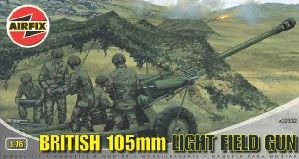 In any Civil War situation international arms dealers generally have a firesale at greatly inflated prices. As the war progresses you could expect to find the US 75mm pack howitzer of WW2 fame - there may even be some in British war stores. The classic American M101 105mm howitzer would I'm sure make an appearance, as would a plethora of recoilless rifles of American, Soviet and Chinese design.  Remember that Recoilless Rifles, were still very much in vogue in the late seventies.