The principal anti-tank weapon issued to British infantry units in 1979 was the L6 WOMBAT 120mm recoilless anti-tank rifle. It was slowly replaced starting in 1979 by the MILAN anti-tank guided missile. The L6 WOMBAT, (Weapon Of Magnesium, Battalion, Anti-Tank) was itself a replacement for the heavier L1/L2 BAT and L4 MoBAT weapons of the 50's and 60's. 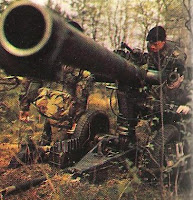 Why a recoilless rifle? Principally because it gave greater bang for the buck. It was designed to meet the threat of the then Soviet heavy tanks such as the JS3 Josef Stalin. A 120mm L44 HESH round with almost 30lb of HE would seriously ruin a Soviet tankers day. A recoilless rifle was also more maneouverable than a traditional anti-tank gun, required a smaller gun pit and had a very low silouette. But it did have three main disadvantages. A high trajectory, a huge back blast and a very big bang when it was fired (160db). 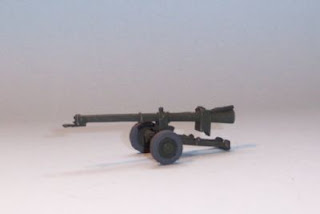 BW Models, BW16: 120mm MoBAT
The WOMBAT was recognisably different from the MoBAT in having a lightweight 'trolley' carriage with a narrow axle and smaller wheels for transport in the back of a 3/4Ton Land Rover. The L4 MoBAT had a wider axle and trailer size tyred wheels to allow it to be pulled by an Austin Champ (withdrwn from service in 1967) or Land Rover. The WOMBAT also had a .50 cal ranging rifle in place of a spotting Bren light machine-gun on the MoBAT. 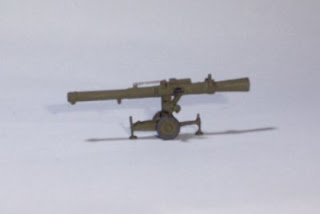 BW Models, BW336: 120mm WOMBAT
I believe the portee Land Rovers had a manually operated winch assembly to aid pulling the weapon back onboard if it had been dismounted for action. It could also be fired whilst mounted from a stationary Land Rover, which had a rack of 6 ready rounds (4 rounds on the Lighteweigh Land Rover?). Mounted on a portee, 2 men normally fired the weapon, though the standard crew would be 3 men. 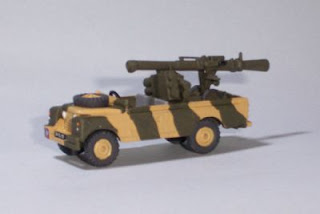 BW Models, BW337: WOMBAT Portee
Mechanised Battalions mounted the WOMBAT in a modified FV432/40 which carried 14 120mm rounds. The WOMBAT could be fired through the top hatch (with 270 degree traverse) or used dismounted and pushed up ramps back into the AFV when required.

The two main rounds for the weapon were the HESH with a range of 1,000m and a staggeringly effective canister round which had chopped steel bar next to the skin of the canister and steel balls inside. The steel balls held a tight cone and the bar angled outwards giving a very wide beaten zone. 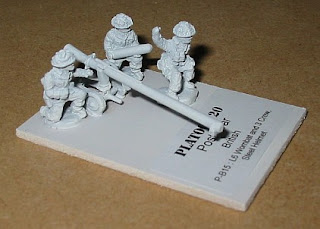 Platoon 20, P-B15: L6 WOMBAT
and 3 steel helmet crew
The support company of most British infantry battalion had 6-8 of these weapons. Normally deployed in sections of 2 guns. There would have been stocks of L4 MoBATs, the interim L7 ConBAT (Converted BAT) in depots if not actually still serving. Some of the older weapons may have been released into private ownership - no less than 15 were privately owned in 2007 and one had been given up in an earlier firearms amnesty!

Whilst not as sexy as a MILAN ATGW, the WOMBAT poses several interesting tactical challenges on the tabletop. The Land Rover portee - whether official MOD model or a farm workshop 'technical' provides your forces with mobile firepower and anti-armour capabilities.