Sapper Joe contacted me offline and asked about the protection afforded to nuclear weapons as this is a key strategic question within a civil uprising or civil war scenario. The subject also has some direct gaming potential for rebels, insurgents or terrorists attempting to seize nuclear warheads or bases.

I did a bit of digging and uncovered a complex arsenal of British nuclear weapons, secret bases, storage and atomic weapon research facilities. Plus a very interesting and little known elite Royal Marine unit. 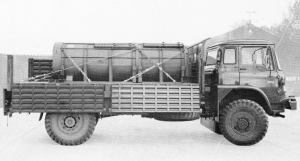 3 Commando Brigade found this role proved increasingly difficult from an operational point of view. Royal Marine sub-units took it in turn to be on standby and would only be given only a few hours notice to provide personnel at X in full combat kit and drawn ammunition.

This is where it all ties in with the very tongue in cheek and gloriously camp 1979 action movie North Sea Hijack. When the first North Sea platforms came on stream in 1975, the British government feared a terrorist attack from any one of the active terrorist organisations at the time in Europe and the Middle East, including Black September, Bader-Meinhof, Red Brigades, the PLO and the IRA. The Maritime Counter-Terrorist Force was set up in 1975 in conjunction with 5 Special Boat Squadron (SBS). I remember Wargamers' Newsletter running an article back then with b/w photos about a training exercise conducted by the Maritime Counter-Terrorist Force and a ships' company of Royal Marines.

Some joined up thining in top echelons brought about the formation Commachio Company Royal Marines, which became operational at RM Condor, Arbroath on 1 May 1980. Three hundred strong it fell under the command of Commandant General Royal Marines (CGRM) in London. I am led to believe Commachio Company RM, also incorporated 5 SBS, and now had full responsibility for the protection of nuclear weapons in both static sites and in transit, and for the provision of reaction forces to counter terrorist incidents on offshore installations or ships at sea. 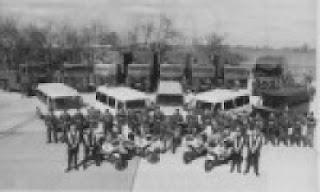 Commachio Company Marines, went through an intensive training programme concentrating on weapon handling, public control, close quarter battle, vehicle movement and Rules of Engagement. The goal being to ensure each member of the Company could apply varying degrees of force at specific targets but also judge when that force can be applied.

I would need to do more research but it appears that nuclear weapon convoys were commanded by an RAF Squadron Leader with a Flight Lieutenant as executive officer. Ministry of Defence Police drivers (armed?) drove the lorries and RAF motorcycle outriders escorted the convoy and undertook traffic control. There would also be a police presence and staff from the Atomic Weapons Establishment (AWE).