.
In a week which has seen an assault on Prince Charles in the centre of London by student protesters, I thought it would interesting to highlight the plans to protect the Royal Family in the event of major national crisis or full-scale war. 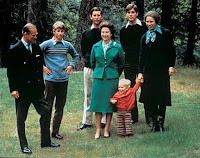 Operation CANDID, came into being in 1963, with the aim of protecting the Royal Family, but especially the H.M. the Queen in the event of war. The details of the plan changed through the decades but were essentially based on creating a Royal Duties Force centred around the Guards battalion based at Windsor Castle at the time of the emergency.

Scots Guards, No.2 Dress
Windsor Castle would be the mobilisation point for the Royal Duties Force, a battalion of Guards, reinforced with a squadron of the Household Cavalry equipped with armoured cars to provide a reconnaissance unit together with a light aid detachment and a communications troop. In total the force consisted of about 1300 men, fully mobile and self-supporting for 7 days. It was well equipped with wheeled transport and included “6 Queen’s baggage vehicles”.

* Guard for Her Majesty the Queen
* Guard for KP17 (key point 17 – a secret location, possibly Buckingham Palace or Windsor Castle)
* Reserve
* Guard for other members of the Royal Family

The Force was capable of dividing into 4 independent units and “should be…prepared to move to different locations to provide guards and establish communications with the nearest RSG”, (Regional Seat of Government), “It would be in radio communication with CHQ, the HQ of the district it is moving through and other groups in the force”. The Queen and Royal Family would be escorted to pre-determined place or places of safety and then provided with static protection. In the event of a nuclear exchange, it's possible that the underground facilities at Corsham would be the main location. However, in our civil unrest / civil war scenario, one or more country houses in the Midlands or Scotland may come into use.