Last night I remembered that somewhere in my book collection was my old, old edition of ARMOURED FIGHTING VEHICLES of the World by Christopher F.Foss.

I dug it out and for twenty or so minutes, savoured being reminded about the AFVs that were around at the end of the seventies. Finally, I looked at the frontspiece to find that it was the 1977 edition!

I'd been thinking about arms sales to the UK - who would take the opportunity to make a buck or offload some outdated kit AND make a buck from our national crisis? Well, the French, goes without saying - just cross the Channel, established arms industry, a quick telephone call to Colonel le Blanc and a couple of ro-ro Ferries drop off some nice shiny Panhards straight off the production line.

Now, ACE make four very nice 1/72nd scale plastic kits of French AFVs that are most likely to have come to our shores - either to bolster of the government or, if you want something that bit different for your forces of Democracy and natural justice, our rebels.

First, the Panhard AML-90. Hard hitting workhorse of the French armoured car fleet. First produced in 1961, sold by the Gaulois load across Africa and other states including Eire. The '90' indicated a 90mm gun with an effective range of 1,500m. Just the job for taking on provisional government Scorpions. 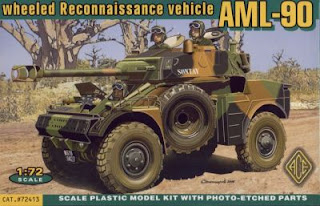 Like our own Ferret Scout Car, the AML series spawned many variants, including the AML-60, armed with a breechloading 60mm mortar. 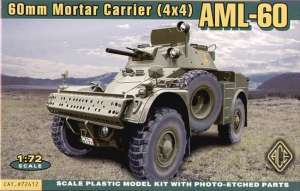 ACE also gives us the Panhard M-3 4x4 armoured personnel carrier. One of my favourite bits of French kit, ever since I saw them in the hands of the Irish Army. I can only really describe it what the Humber Pig would have been, if it had been designed with some classic French chic! 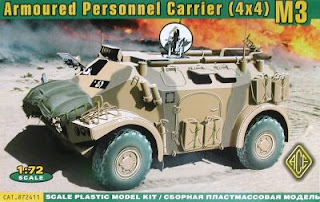 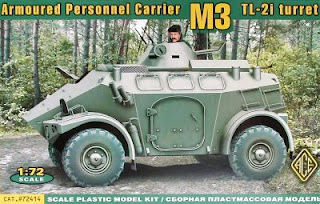 If you are clever in your purchasing for Winter of '79 you can use at least a couple of these French made AFVs for our civil war scenario AND have forces available for AK47 Banana Republic games, or hypothetical cross-border run-ins between Brits and Irish border patrols.

All these kits, plus 1/72ns scale Scorpion and Scimitar kits are available from Model Hobbies in the UK.

Now, taking into account the comments left below, then we are left with the Heller VAB VTT 4/4 1/72 APC. The VAB entered service in 1976, so right for our time frame. If you use your Googlefu wisely, you'll find them for under £5. 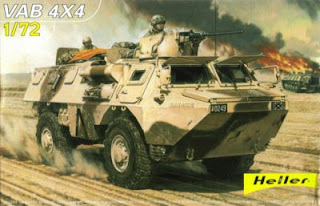