The Lightweight Land Rover, or Truck, Half Ton 4x4 Rover, was conceived in the 1960's to provide the Royal Marines with a a heli-portable vehicle, capable of being slung beneath a Westland Wessex helicopter, yet still capable of transporting a four-man team with their kit or half a ton of cargo, without overloading. At this time, the Royal Marines were using Citroen 2CV pick-ups, yes really! Flying them ashore slung beneath Westland "Whirlwind" helicopters. What a sight that must have been! 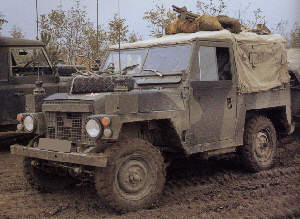 The Series IIA 88 inch Land Rover wheelbase, was modified by redesigning the standard Series IIA axles and fitting shorter half-shafts, reducing the width of the vehicle by 4" so that it would fit on a standard NATO pallet and flown in a Hawker Siddeley "Andover" transport. For an early Wessex helicopter to lift, it was found that the weight needed to be reduced sufficiently through removing the tilt (hood) and sticks, the upper parts of the body, the doors and windscreen, then refitted later in the combat zone. By 1979, more powerful engines in the "Wessex", the introduction of the Westland "Commando" and Boeing CH-47 "Chinook" negated the need to remove body panels.

The Lightweight could therefore be easily lifted by Royal Navy Commando Sea King helicopter, or taken ashore in an LCVP. With a deep wading kit fitted to the vehicles, they could drive ashore in up to five feet of rolling surf. Later it would be possible to fit a pair of Lightweights inside an RAF Chinook helicopter, though being under slung offered a quicker method of insertion than having to set the helicopter down on the ground for unloading. Two two pairs mounted on Medium Stressed Pallets could be dropped by parachute from an RAF Hercules transport aircraft.

Like it's bigger brothers in the Land Rover family, the Lightweight served in a variety of configurations including hard top and 'safari'. They were uparmoured for IS duties in Northern Ireland with VK armour kits. The Royal Marine converted a small number (around six?) into a self propelled Wombat 120mm recoilless rifle carrier. 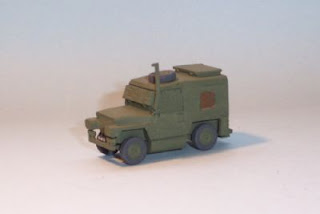