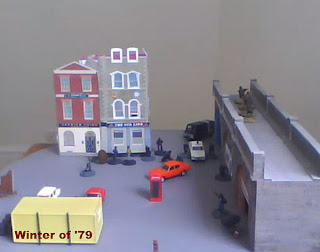 Bianca Doherty, barmaid in the Station Hotel said, "It all happened so fast, these three men charged in just as I was serving Mrs Perks her babycham. They ran upstairs and I heard shouting then a gun and then a lot of shooting; though I did hear someone shout "You're nicked Croydon!" then two came back down. One went to the front door and shouted to someone, "they got Terry" while the other asked me for a large whisky and a pack of Players".

Meanwhile, on Alma Terrace, a fierce gun battle had erupted between DC 'Bungle' Goodhope and a pair of gunmen hiding out in The Arches Garage. One uniformed officer was wounded while Goodhope held off the villains - being wounded himself  whilst shooting one dead. With the arrival of the local SPG, armed uniformed officers moved up to the cover of the Railway Cafe. At this point DCI Hacker called on the surviving gunman to "give it up it's not worth it you toerag".

DCI Hacker was forthright "These trots and blaggers have to be stopped. Me and my lads will do all we can to bring them in and stop this armed liberal anarcho nonsense".

The spokesman for Felpersham against fascism", Sid Grundy decried the  "brutal murderous bully boy tactics of the fascist goons, this is a government clampdown..... you got to decide,whose side are you on, next time the whistle blows!"

This was a short, sharp, riot of a game using GEEZERS: SHUT IT! played via Skype. Took 30 minutes to play but generated an hour of excited chat afterwards. Minis were mostly Platoon 20 for the detectives and slags with ex-Hotpsur armed police for the SPG.