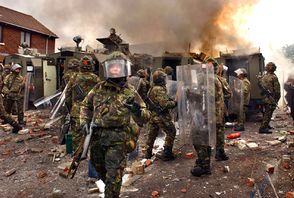 Winter of '79 represents an alternative history of the late seventies and early eighties. In this vision, the 'Establishment'  take control of the legitimate government and the subsequent 'crackdown' is faced with spontaneous popular resistance led by trade union, liberal and left-wing elements, which boils over into civil war.


Now, I'm going to ask you to forget your own perception of the reality of 1979. Reality? It's only what you believe from what you have been told and will be different for each of us. Just so much conspiracy theory, so what? It simply provides the box within we can build our games.

What did happen, what could have happen what would have happened doesnt matter at all. Not a jot. Winter of '79 provides me, Maff, and I hope some of you with the context and motivation for fighting games based upon a premise of DPM vs Donkey Jacket, SLR vs Armalite, Brit against Brit, in the late seventies and early eighties.

It identifies the protagonists as left vs right, reaction vs liberalism. You can choose to define this at the national level, regional or right down to the local basis. What's happening nationally doesn't necessarily matter if you want to just fight out some actions in Borchester and do house to house, barn to barn fighting around Ambridge.

All we need is a rationale for the battle, who is involved, how they are uniformed and what they are armed with.

VBCW this is not! No tea and hand grenades Vicar. But there is no reason not to have colourful private armies, trade union and left-wing militias, local defence leagues, new military and para-military formations, each with their own identity defined by your choice of uniforms, camo, weapons, badges and personalities.

Equally the forces on your tabletop can simply be armed civilians vs military, helmets vs berets, maroon vs green, SLRs vs Armalites. International volunteers? Foreign assistance? Your call. 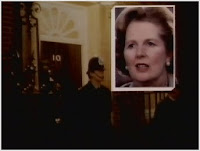 So why 1979? Because it's a watershed. The Winter of Discontent, the collapse of the Callaghan government, the rise of Margaret Thatcher. In the years immediately before we see the vested interests and right-wing gearing up for a 'battle to save civilisation' as they knew it. A fear that Belfast could easily be replicated on the streets of Birmingham, Londonderry in Liverpool. In the years immediately after, we have unrest in Brixton, Bristol, Toxteth and the Miners Strike.

Whilst I may have chosen to play through the scenario of a popular opposition to a right wing crackdown following the election of Maragret Thatcher, you may choose to have it the other way round - with a Moscow backed Marxist take over being thwarted by a military coup or a protracted war of resistance by secret armies.


All in all, there's everything to play for. So, lets slide back the bolt, put a round up the spout and take the safety off.....