A dull wet day in the 'Shire today was lightened by the postie bringing an order from S&S Models that included Shaun's new Bedford RL 4x4 GS Lorry at £10 including p&p (UK). 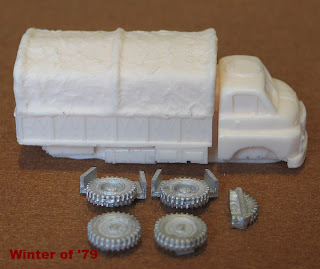 S&S Models Bedford RL 4x4 GS
Here it is straight out of the pack. A good solid one-piece body and cab with well defined detail such as the rigging that holds the tarp down. The kit also comes with four separate metal cast wheels and spare with the rear wheels having the mud guards mould on. I find the quality of the wheels and tyre tread detail on S&S Models particularly good and the RL is no exception.

I found the RL's dimensions to be spot on when placed against 1:76 plans in The Modern British Army by Terry Gander (1980 edition). The whole kit fits together very easily to produce a sturdy wargame model that looks the part. 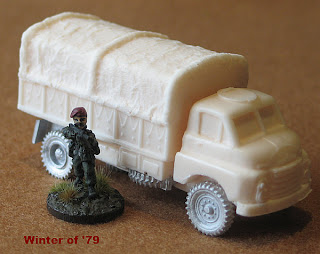 Quality wise this is a fine wargames model. There are a few small bubble holes but these are mitigated by only a thin cast seam round the bottom of the model that a quick run over with wet and dry will remove.

Assembled as above, you can feel the misery of  30 cold squaddies in the back on the way up to the Beacons with the rain whipping up under the tailgate. Or 80 boozy squaddies in T-shirts and Jeans crammed in and holding onto the tarp rails for dear life after a trip to the local Bierkellar! 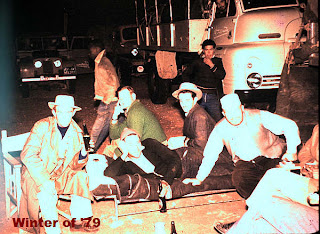 The RL GS saw action with British forces in Malaya, Kenya, Cyprus, Congo, Operation Banner amongst others. It also served with Commonwealth & UN forces in the 1950's-70's throughout the world. I've included a family snap above of an RL GS in the Libyian Desert around 1965. I'm thinking that a diorama of an RL and MK2 Land Rover will make a perfect personalised gift for my father-in-law's 80 blah blah birthday.

Despite being 'officially' superseded by the Bedord MK, the RL would continue to serve in the British Army until the late 80's - often in a variety of support guises such as signals wagons, REME workshops etc.

Overall, a fine model and recommended for your Winter of '79 vehicle park. Perfect transport for my Bootnecks!