....But so is the Bedford RL 4x4 GS wagon that Shaun is currently working on at S&S Models. 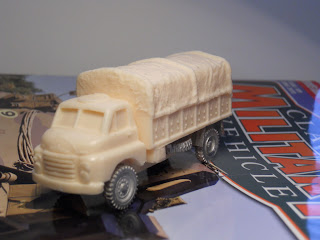 S&S Models Bedford RL
(Courtesy S&S Models)
The RL 4X4 was developed from the postwar Bedford "S" series and was introduced in 1953. RL's were used by Auxiliary Fire Service, the Military or Local Authorites and Utilities. They could be found across the world in Commonwealth armed forces too. Tough as old boots, many RLs are still going in private hands. The RL based 'Green Goddess' Fire Engines were sold off by the government, largely in working order, in 2004/8.

Effectively replaced by the introduction of the Bedford MK which began in 1969, the RL still soldiered on in the Regular and Territorial Army in several guises throughout the Winter of '79 timeframe and well into the late eighties.

Several thousand are known to have been bought by the Home Office and stockpiled for use in any potential national emergency.

So, no excuse then not to field at least one of these beauties.