What About The Smaller Picture: Gaming in 1/300 & Below 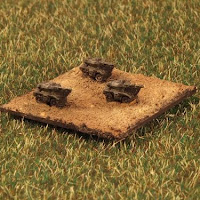 Just after we started Winter of '79, Maff and I looked at whether there was any mileage in doing it, even duplicating in part in smaller scales such as 1/300 or even 1/600th. In particular, because we both liked the look of the Oddzial Osmy range of vehicles - more so once they introduce the Saracen APC and Saladin APC.

1/600th had the advantages of being cheap, easy to paint, perfect for including air power, plenty of room for manoeuvre and lose the edge of the world gaming syndrome. Plus it's perfect for gaming ontop of Ordnance Survey maps. The disadvantages being that the scale lacked the character we required. Especially in the realms of infantry. In fact as we wouldn't be using FV432's in any numbers, we'd end up using a base of Land Rovers to represent infantry units. And without any large number of MBTs in the country, we'd be reduced to actions fought between troops of Scorpions, Scimitars, Saladins, Foxes and Ferrets with the occasional inferred infantry presence. And in this case, 'infantry' represents a whole plethora of militias and rebels and everything in between, as well as para-military, part-time and regular troops. Not ideal.

But maybe as a one off, maybe this is how we play the 'thunder run' into Wales with Saladins proxying for Saxons etc Bear in the back of your mind that we are not trying to play Kursk on Salisbury Plain or Stalingrad in Salford.

Let's turn now to 6mm or 1/285-1/300th scale. This scale is popular and boasts a wide range of manufacturers of infantry, vehicles, air power and terrain. It has many of the advantages of 1/600th but in addition starts to bring in recognisable detail in the figures. I have to admit that Heroics pack M4 Modern British Infantry remain some of my favourites as they are clearly 1970/80's Brits in scrimmed helmets carrying SLRs, GPMGs and Carl Gustavs. Pack M5 is British Infantry Support and M14 are Royal Marines - with the biggest 6mm scale bergans anywhere!

Irregular Miniatures Riot Squad
A wider range of vehicles exist as well including the Saxon and FV432+Fox turret (Skytrex). Irregular also have police, rioters, civilians, guerrillas and generic infantry that can fulfill a wide variety of roles. In fact I'm now thinking OK, for the flash riot around an arrest, 20mm, but for full 'Red Felpersham', Borchester Burning' inner city mayhem 6mm is the way to go. I can build an entire city centre very easily in 6mm on no more than a pizza base.

Irregular Miniatures Civilians
I'm not a slave to scale. 1/300th or even 1/600th would remain subordinate to my 20mm games but still could provide a very viable means of representing some of those aspects of Winter of '79 that would be nice to game on the tabletop.