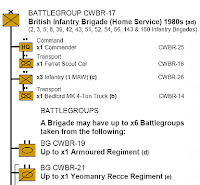 The decision to use Cold War Commander for Winter of '79 has proved to be a good one. It has removed several of the blockers in my thinking that were preventing me from realising the open warfare elements of the full blown civil war phase of the Winter of '79 scenario.

Plus it brings with it a quick win in the ability to use Mark R Davies' British Orbats for the 1980's (including notes for 1976 onward) as is, and they are available as a pdf download from the Fire and Fury dot com forums. These include regular and TA, infantry, armour, Paras and Marines. Sorted.

Mark is one of the few 'names' on TMP that I trust if not respect for researched, informed, balanced and objective comment. Despite the good work done by Mark I would urge against treating this information as tablets of stone, but it remains the best single, coherent source I've come across.

Looking at the factors for the infantry in Cold War Commander we need to make some changes to reflect the variation in training, discipline and quality of forces in a civil war. Forget factors assigned to other nations troops - we are not comparing like with like, but looking instead within a sandbox created by Winter of '79 where the factors need to be comparative between a range British regular, reserve, para-military and irregular internal foes.

The easiest thing would be to simply trot out a series of different Attack Factors - but I feel we need to go beyond this and use the full gamut that Cold War Commander has to offer. I'm expecting a bit of experimentation during play, but hey, all armies need to shake down and absorb the lessons of the first battles in a shooting war - Goose Green being a prime example.

I'll share my draft ideas with you in a day or so.