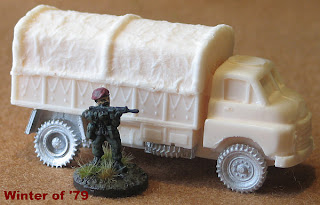 David, my father in law, came round yesterday. So I took the opportunity to show him the new RL from S&S Models and he loved it!

David recognised it immediately and was very complimentary about the detailing of the cleats (rigging as I like to call it). So I know what he's getting for his birthday now!

Of course, the RL unleashed a stream of stories about Libya. Many of which I've heard before but always glad to hear again. And every so often something new pops up. David also worked alongside several ex-LRDG veterans, who once again, had found a post war role in the desert, Only this time hunting oil rather than the Afrika Korps. They used a heavily sandbagged RL to lead the convoys, often along the same old tracks they had used during the war. 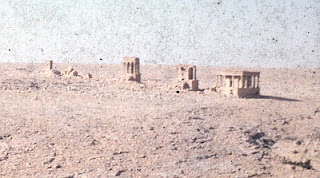 Libya; Family Snap
He also tells a story of being tasked with building an airstrip at Bizerte for Chevron (?). First they have to clear the land mines and as you know, millions were laid by both sides during the desert campaign. Well, he has a crew of guys made up of dispossessed Czechs, Poles, Hungarians all ex-wartime Sappers who've found a market for their trade in peacetime. They're led by a German engineer. Anyhoo, David and the German are sitting sharing a beer, whilst the mine clearing crew are at work.

The German fella says "Nein, Nein, they won't find them over there, they need to go to the left".

David says "What makes you so sure?"

Laconically the German says, "I laid them!"