Arms And The Woman 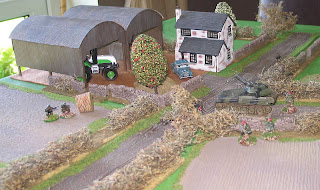 An Emergency Government Army Air Corps Scout helicopter radios HQ with a report of suspicious activity in the area based on Cymthallen Farm. Lieutenat Cornwell, 5 Para leads his QRF to the map reference. One Scimitar is destroyed by a mined culvert which alerts the men in the house.

Cornwell pushes on with the intention of stopping any vehicles leaving the farm but is in for a hot reception. McMillan is left to save as much as he can whilst Cadwgan, Masters and Imogen (wearing a Free Wales Green Beret), try to hold off the Paras. 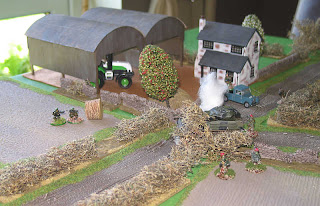 Masters is wounded but Imogen picks up the LAW and steadied by Masters puts a big dent into the Scimitar, shocking the crew and Paras into cover behind the Beech hedgerow banks. 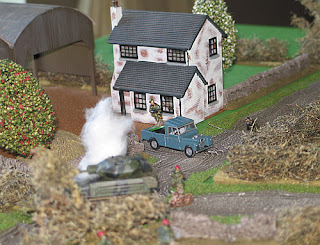 McMillan (green base) breaks for freedom in the Land Rover but is gunned down by Corporal Smollet. 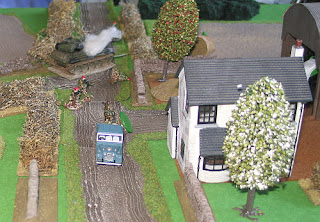 Cadwgan makes it to the Land Rover and pushes the bleeding McMillan to one side. 'Wellie' down he drives them both to safety. Masters and Imogen surrender.

Cornwell surveys the scene. One man down, two tanks out of action, suspect vehicle gone. But on the bright side a Marine Captain and a future Miss Wales in custody, plus there's plenty of 'oops. With that balance sheet he'd be lucky if he wasn't on penguin patrol in the South Atlantic in two months time!

Rules for this short sharp rake were Cold War: 1983 with a few fast play house mods.