The SAXON Armoured Personnel Carrier (APC) developed by GKN Defence would definitely NOT make it onto Jeremy Clarkson's 'Cool Wall' - you would not want to pick up Kristin Scott Thomas in one of these. However it does have a certain 'Internal Security' look that would make it perfect in Winter of '79. 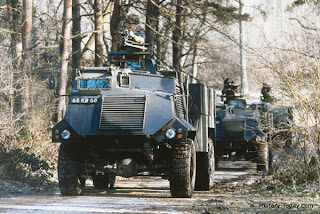 AT105, later christened SAXON (1982) was manufactured in 1976. It was the successor to the dismal failure of the AT-104, introduced in 1972,  as the first vehicle specifically designed as a response to the urban insurgency in Northern Ireland. The AT104 looked like a bigger version of the FV1611 Humber Pig and was essentially an armoured truck sharing many of the components of the Bedford 4x4.

The AT105 differed to the earlier AT104. in that the armoured hull gave the same level of protection to the radiator, engine and transmission as to the crew; eg it could withstand small arms up to and including 7.62mm armour piercing rounds and 155mm shell fragments; redesigned hull floor to give increased protection against damage from mines; more powerful diesel engine and a shorter wheelbase for improved mobility and turning. Able to carry 10 men and all their gear, "big as a house" inside it was considered by those who were hapless enough to ride in it - "better than shankies pony". The AT105 is still used in Afganistan and appears to be able to stop AK47 rounds.

In all fairness to the SAXON, it was not designed to serve as an armoured personnel carrier in the forward edge of the battlefield, but rather as an armoured transport to move reinforcements - mostly from the UK to their BAOR area of operations in relative safety from ambush and air attack.

Whilst the first production run was in 1975 the AT105 would not see service with the British Army till 1984, I think we can safely assume that a national emergency of the magnitude of Winter of '79, would see SAXONS moving troops to hotspots and patrolling the country lanes. 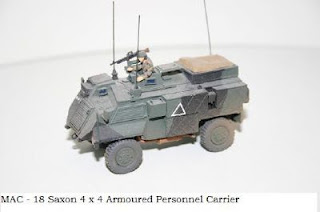 Kingfisher Miniatures produce a wide range of SAXON variants including:

In all likelihood the Saxon would be far more common  than an FV432 on British streets. For a one-off model I may well go Kingfisher but for two or more, RH Models will be the order of the day.