Penny Pinch Farm: Borset
Some time back of crow fart
There's no way to hide the tell tale sound of the rotors as the three Scouts turned into the valley. Pearce, from Lough Erne was the first to wake. It was almost too late. 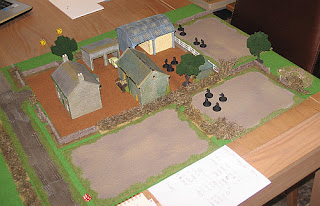 Mac and team one rapelled  into the field behind the Dutch barn. With rotors clear, the Scout carrying team 2 moved in and hovered in front of the barn. Team two rappelled here - but a catastrophic roll - Chas's line snags and in trying to free it he crashes 30 feet to the ground.

Team three are the last team in and drop into the field behind the farm whilst Mac in clearing the Dutch Barn. 'Badger One', the sniper OP (off table) reports lights on and quickly off in the house. "Shit!" mission is going loud!

AR15's and an FN FAL open fire from the upper story of the farmhouse. Two Free Taff's (Jones No.1 and Jones No.2) leave their quarters in the upper storey of the bothy and undecided get caught in a firefight with Mac's team. 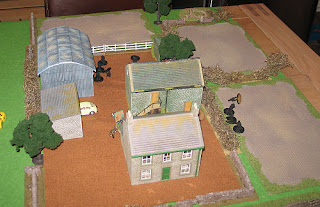 Scotty leads the remainder of team two in the equipment shed on the ground floor of the bothy. All clear. Plenty of noise upstairs. There's a door. Sponge bursts through it and rakes Jones 1 and Jones 2 with his MP5, only to be hit in return by Dermond.

The IRA guys upstairs in the farmhouse start scoring hits on the SAS. Greaser goes down in team one, Mick, Doggo and Banger in team three are all hit. Sprouts is killed. Banger manages to wing Pearce. As Pearce stumbles into the front bedroom, Badger One takes him out. At this point things are seriously going Pete Tong for the SAS. 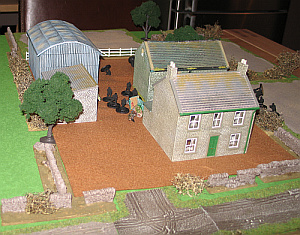 Mac leads Rollo and Suds in a rush on the corner of the farmhouse, where they take out Dermond in a fusilade of machine-pistol fire.

Team two make as much noise as they can to distract the occupants of the house. A long haired Taff appears at the top of the steps and fires an Armalite into the shadowy figures in the yard. this only results in him being instantly killed by Mac and co. Someone shouts "Owen! Got the bastard!" over the channel. 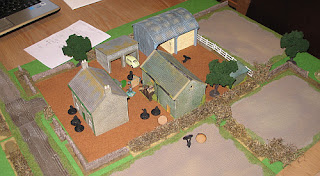 An Armalite fired from the house kills Mick in team three just as Mac, Rollo and Spud make a forced entry through the front door. The flash bang stuns McElhinney in the kitchen doorway and he is double-tapped. At this point the dice roll poorly resulting in an Armalite being thrown down the stairs and an Irish voice calls for surrender.

Mac shouts out for all weapons to be thrown down. A shotgun and another Armalite skid down the stairs. As Mac and Rollo reach the top of the stairs a shot rings out, a wounded IRA man fires with his pistol but misses. His last mistake. McIlroy survives - just - is hooded, cuffed and taken downstairs.

A handkerchief appears behind the door of the Bothy - the last of the Free Taffs gives himself up...... 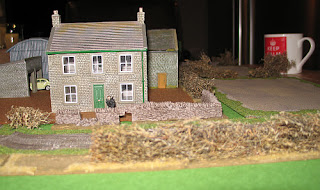 Final words from Mac.... "Target neutralised. One taff, one paddy secured. Someone tell the Paras to get over here and leave a note for the milkman! Out."

Cracking game. We both had a real laugh. Just under an hour to play on a 'school night' using Cold War: 1983. I made it tougher on the SAS (Maff) as it's about the game, the theatre and meant to be a bit of a challenge without spoiling the fun. We both agreed over a wet following the endgame, that the balance was right.